Business as usual in the seventh day of the World Cup, with all the favorites winning their games by the single goal, and with situations in the groups starting to become clear, so that Group A, for instance, doesn't even need the last game, what with Russia and Uruguay - already qualified - playing each other, and Egypt and Saudi Arabia bowing out regardless of the outcome of their game. One might wonder, with Egypt likely to win that game, just how important will be for Salah's team to go home with a win, even if that win will only count for statistics. My reckoning - not very. 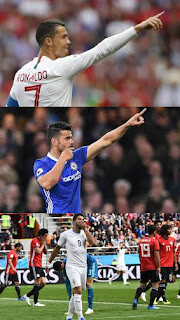 Suarez broke the ice for this tournament with a very opportunistic goal which reminded me of van Nistelrooy. Now, despite him being a dick on a number of occasion and despite him playing for Liverpool and Barcelona, I am rather ambivalent towards Suarez. First off, he was unfairly demonized when he punched his way towards the headlines in the QF against Ghana in 2010. Many commentators saw his last resort handball in 90th minute as cheating, I saw it as taking one for the team, and show me the footballer who wouldn't have done the same to put his country in a WC semifinal. His numbers for Ajax were also impressive, what with those amazing 35 goals in 33 games in the 2009/10 season of Eredivisie. But then of course I don't condone cannibalism, specially when it's a repeat offense, nor do I condone playing for Liverpool or Barcelona. I do like Uruguay so much, however, that I can even cheer for Suarez when he scores for his country.

The same cannot be said about Diego Costa. Once a prick, always a prick, and he proved it once again by over-celebrating a goal to which he had a rather small contribution against Iran. After riding their luck for the whole game against Morocco, which they won despite being second best, the Persians were given a taste of their own medicine, a very worthy performance against Spain coming to nowt. I do like Iran, mostly for Carlos Queiroz, and deep down I hope they can pull a miracle against Portugal and go through. It's a tall order though, as Portugal looks like the best team in the group and Ronaldo is in the mood for football, no doubt eyeing the golden boot of the tournament at the very least.

The primadonna of Funchal scored a great goal, his fourth of the tournament, to put the game against Morocco to bed early. The Maghrebians seemed to have decent spells in the game, but unlike in their first game, the 90 minutes against Portugal were a struggle that the Moroccans, however much sympathy I might have for them, were ill prepared for. They never looked like getting anything out of the game despite their numerous calls for non existent penalties.

Group B might still be an interesting one if Iran pulls the aforementioned miracle. That would send Portugal home, which is both unlikely and unfair, as if there is a team that doesn't deserve to qualify, that is Spain. The former world champions, despite bringing another superstar team to the World Cup seem to have reverted to their pre-2010 state of also-rans. Their are not playing to their players' potential and it's only the sense of entitlement and a few lucky streaks from individual players (mostly Costa and Isco) that qualified them after two games in which they only won one and deserved neither. I would prefer them being pitted out against Russia rather than Uruguay, as luck - natural or man-made* - is more likely to even out there.

* by 'man' I mean FIFA. I know I said I'm taking a shine to Russia, but that doesn't mean I'm forgetting who we're talking about.
Publicat de Leo la 14:03