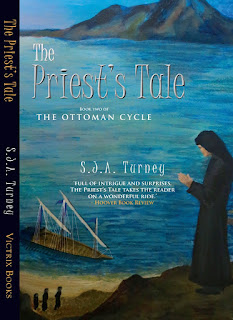 I will end my review with a quote that is becoming recurrent, as it appears at least twice in the third book of the cycle as well: "Vengeance is hollow victory, and as oft destroys its perpetrator as its target", Cesare Orsini tells Skiouros, and in the light of this wise words I am very curious to see if and how the young Greek's vengeance will be carried to an end. I am a book and a half away.
Publicat de Leo la 01:42 Niciun comentariu:

Having finished reading all the 8 books that have come out so far of the Marius' Mules series, I am now learning how it feels for viewers of box sets to wait for a new season. Or, I imagine, for readers of historical fiction waiting for the next book in a series they enjoy. It's frustrating, specially when Simon's last update on it is: "As well as MM8, I'm on various simultaneous projects: I'm in the final stage of editing a kids' book that's with my agent, I'm in the same stage with the joint work with Gordon, I'm busy writing book 2 with Gordon, I've a short story collection for charity sitting idle, waiting for a foreword to finish it off and now I've been signed up to join in with another project."

So my choice of reading was one of Simon's two finished series: The Ottoman Cycle and Tales of the Empire. Given that I am not a big fan of how 'fantasy' sounds' (too reminiscent of Game of Thrones or Lord of the Rings) and I am a new convert of the historical fiction genre, my choice was simple. I was itching to see how Simon portrays the Turks anyway, as the history of the Ottoman Empire is closely related to my country's history, and I'm always curious about that.

This book is almost a case study of how an author is allowed to create his own rules within his own work, as long as they are consistent (unless, of course, he builds inconsistency in as a rule). The book is built on a couple of real historical events and around historical buildings of Istanbul, but the main plot and the main characters are all fictional. Also, so consistently built that a reader can assume the events might as well have taken place. And with this, Simon might give future historians a headache, as once a book that does that reaches classical status it becomes much better at entering the collective memory than a scholastic work. It doesn't even matter that the author himself puts a disclaimer at the end. Some people REALLY believe that Sherlock Holmes REALLY lived at 221b Baker Street and, more important, people like to believe it.

And Skiouros, our hero, is likable enough. He's innocent and mostly open and honest about his intentions, while it's also got plenty of flaws that make it easy for the reader to feel a connection: he's a thief, lowlife, without any ambitions or goals. He's a drifter, basically, though a drifter no older than 24, though likely quite a bit younger than that. And Skiouros story will take him throughout the city of Istanbul where he's spent the last eight years of his life and where, in the space of a week in 1490, the circumstances will take him in close proximity of some of the most powerful men of the day and will transform his life forever. Skiourous' story is fascinating enough, but the way Simon creates situations and twists makes this book a proper thriller, with twists and new developments coming in fast and thick, guaranteed to lose the reader some sleep.

And because Simon is not tied to a real historical narrative, we are completely in the dark, never knowing what's going to happen next. I feared for Skiouros' life quite a few times and the knowledge that the last book of the series is introduced as 'Skiouros returning home' assured me that he'll survive the world-shattering events (in more than one sense) he goes through. Other characters, however, are not that lucky. I was surprised at the sudden brutality with which Simon disposes of some people, it's like he suddenly found his inner George R.R. Martin.

I will throw a spoiler in the mix, so if you're not into that skip this passage entirely. Now, before I get to the next line. Here goes: people are trying to kill the Sultan. Knowing as we do that Bayezid II reigned from 1481 to 1512, we hope we'll be safe in the assumption that the Sultan survives. I did wonder though if, in the virtue of the author creating his own rules principle, Simon might actually pull an Inglorious Basterds on poor Bayezid II. And he's well within his rights to do so, too. Who's to stop him?

I will say this more: the end surprised me quite a bit. This being the Ottoman Cycle, I expected to be introduced to a hero and see life in Istanbul through his eyes over the course of four years. This does not happen and to a reader this unknown course of events and surprising turns are a rich reward.

If I was to correct anything, I would say Simon is too in love with the historical Istanbul and some pages are going towards talking about that: streets, period colouring, buildings, buildings' interiors, clothing, the looks of food stalls and the like. They're very useful, very educational and provide a sometimes necessary respite, though at times, specially when we know our heroes are in a place of bother, talking about a building's defective staircase is playing on out nerves a bit.

But the one big conclusion to be drawn for this book is that Simon proves he is a multi-faceted writer, able to switch between periods and styles, between the big epic and the individual story while keeping the ingredients that make his books such a good read: the fast-paced action, the suspense, the insane level of documentation.

And sometimes he provides memorable quotes, too. Here's a few samples;

"Haggling with a Greek, they say, is like trying to ride a two-legged donkey: it takes too long and you'll wish you hadn't tried."

"He can see beyond the trappings of their religion to the fact that they are men, and he treats them as such."

"Religious fanatics were dangerous men to work with. They tended toward irrational acts and unpredictable moves."

"Do not worry about tomorrow, for thou knowest not what the day will bring forth" (Judah Ben Sira)

"May God smile upon your ship and your voyages" "And may He look the other way where you're concerned."
Publicat de Leo la 23:36 Niciun comentariu: