Title is half the story 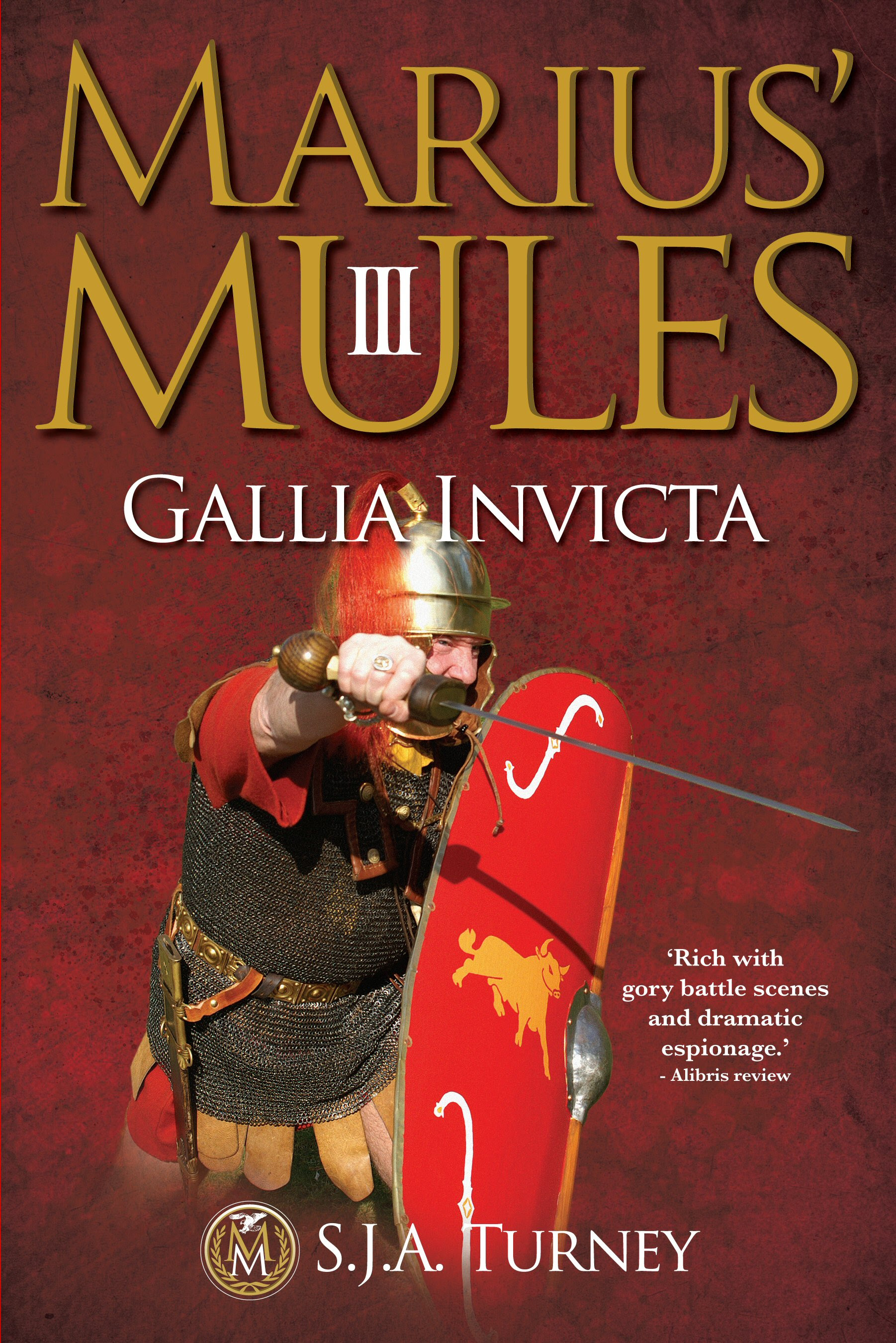 This third book of the Marius' Mules series follows the deeds of Julius Caesar and his army in the third year of his governorship in Gaul. While Fronto is still our main character, this book breaks away from the character-centered style of the first two titles and we see other notable figures in the legions getting more pages than we were used to.

Determined partially by Caesar's approach to the year's campaigning, the story follows alternatively the three army bodies the general split his legions into. Another factor in this decision is a visible change in approach from the author's part. In an attempt to make it a more complex novel, Simon expands his narrative threads thus adding a complexity to the book that  - to my mind - makes it the best in the series so far,

Everything I've been complaining about in the previous title is corrected: new ways of advancing the story are explored (such as letters or dialogue covering the action, rather than simple description), we get characters that become at least as likeable as Fronto (hails for Galba, legate of the XII and centurion Cantorix of the XIV) while everyone's favourite legate indulges in so many binge drinking episodes that they scratch the shiny image of his perfection. And, a personal favourite, we get the introspections, the looks inside characters mind. Remarkable in this regard is the story of tribune Rusca of Legio VII, introduced as a green aspiring politician with no battle experience and his transformation into a hardened soldier over a very short, but very intense period.

But the cherry on the cake is the transformation of Crassus. While hints were dropped in the previous book, it is here that Simon gives a masterclass in portraying a character. Young Crassus is still arrogant, harsh and sometimes reckless, but we get to see his redeeming features as well: he can admit to his own mistakes, he can conceive a winning strategy and motivate his soldiers to follow him into danger. Crassus ceases to be a human feature under the appearance of a human being and becomes a real person, with merits and faults. His evolution is so immense that the end of the book even catches glimpses of a bond and sympathy between him and Fronto.

The sieges, skirmishes, ambushes and full blown battles are still there and while voices might say they become routinely and boring after a while, I did not for a second thought it was the case. Not only are they so imaginative that one can only admire the huge documentation and thought process involved in creating them, but Simon also knows how to alternate these gory, grisly battle scenes with non-fighting intrigue that none of them becomes suffocating for the reader.

Another novelty, the book is framed by political intrigues in Rome, with Fronto at their very center. I am not the biggest fan of these chapters and it is my impression that Rome is best served, in fiction at least, by characters like Fronto or Maximus the gladiator who fight for its glory without ever witnessing its putrefaction. But I do understand Simon's enterprise and his attempt to understand the deeper motivations of the historical figures, beyond their military actions.

There are a lot of episodes I've fallen in love with in the same manner I was falling in love with the tales of heroic deeds in the stories of my childhood: Galba's escape from Octodurus, Cantorix's antics at Crociatonum, Atenos' calculated madness in the naval confrontation with the Venetii or Fronto's bath engagement with the two gladiators.

I do not fully understand Galronus' position and attitude for, while he is theoretically a hostage and representative of a people under very recent Roman occupation, he acts and talks entirely Roman. But I will let that pass as artistic licence. And there's another bit in which I think I disagree with the writer: while I do think that the Romans had a sense of entitlement and duty to take "civilisation" to "barbarians" in a manner not dissimilar to the USA today or the British Empire in the 19th century, I doubt the conquered people were so eager to admit the superiority and merits of Roman "civilisation". It makes in fact little sense that the very people that were fighting the Romans the year before would become trading partners over the course of a winter. Or that the Menapii would be convinced to drop their weapons, quit the fighting and return to the fields by a speech.

But Simon, just like Julius Caesar or Fronto, belongs to a people whose military might authorizes them to think of their civilisation as superior to the conquered ones. And, when I add to the mix the notorious Saxon ignorance when it comes to other cultures, I realize Simon actually does a great job where a lesser writer would be way out of his depth.

I am going to close this review by reiterating the feeling that my words do not really convey how much I've actually enjoyed the book and there's probably no potential cover quote in what I've said. But to any Roman Empire aficionado, this one's a must read. And anyway, if you've come near the MM series, you'll find it very difficult not to sink in.
Publicat de Leo la 15:58 Niciun comentariu: