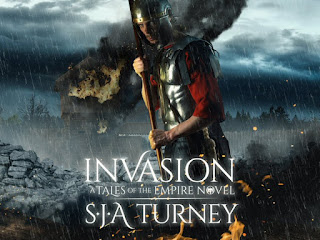 I am, upon reading Invasion, intrigued by the 'Tales of the Empire' series and I shall take on to reading it. There is talk of Khans plundering the capital, how can one not want to see what's it all about in this beautiful historical mash-up with changed names?
Publicat de Leo la 04:57 Niciun comentariu:

And then the all familiar thud of the cane. Oh...

Poor Irene! I feel her looking at mix confused, with a mix of sadness and guilt. The other girls are just confused. I don't care anymore. My feet hurt like hell, I need to sit down. The little man can go as crazy as he likes, I've felt his cane on my back before and it's nothing like this horrible ache I have in my foot right now. Feels like a stabbing where the knife is still inside and an invisible hand is pulling it up and down, left and right, like trying to chop my foot off. Which is a bit ironic, because I can't feel my foot anymore. But it's there alright. There's more of it, even, I notice looking down. Swollen like the Seine after a heavy winter. And a bit blue, as well... I go towards the bench and put my feet down... oh, that feels good! Teacher's face is actually funny. I feel like I'd be laughing otherwise, luckily enough my face is too twisted with pain to be needing the effort of holding in a LOL.

'Ah bon... how long left? 7 minutes? No matter, we stop now. Mademoiselle primadonna doesn't feel like rehearsing, so everyone loses 7 minutes. Ok, get your clothes, see you tomorrow! Bonjour!'

'Gosh, he was rash today! And not a word either! You ok?'

Irene sat next to me, genuinely worried.

'Yeah, just... it hurts! He might as well kill me, I feel like I'm dying anyway.'
'No, come on, it's not that. You know he's worried about the show! He's worried you're going to pull out!'
'He! Come on, Irene, we both know I'm not gonna make the show. He won't play me like this!'
'Like hell not! You're his best ballerina by far!'
'Was, Irene. Seriously, why do you think he asked you to paint your hair red? You're going to be his Giselle, I don't know why he hasn't announced it yet. At this rate, I'll be lucky if I make a nymph. Then again, I'm not even sure I want to be in it anymore?'
'Is it really that bad? Still that stupid accident?
'Of course it's the stupid accident! I'm on the brink of giving it up altogether...'
'No!' said the choir, Curiously enough, it felt like a surprise to all the girls.
'But you've been doing this since you were three!'
'The only reason I'm still doing it, really. Learned to dance before I learned to walk properly. Come on, you've all done the same. It's just that I had my accident. That silly, stupid accident that throws half my life out the window. I'm falling behind, and I would've quit a while ago already, but I'm not really sure how to go about without dancing...'
'But surely the doctor...'
'Come on, Irene, what's the point? Let's go home.'

Poor Ali, waiting for me, as always. Strange thing, he's still reading. Oh, that's right, we were out much earlier than usual. I wonder if professor is home already. He was redder than Irene's hair when he left... mine has started to fade, I should probably dye it again. Bah, can't be bothered. Need to have a chat with mum, that'll be a blast!

'Irene, this colour looks great on you'
'Merci, Ali!'
And the awkward kiss on the cheek. I love the feeling when Ali kisses me on the cheek. I put my hand just below his shoulders and I can feel his whole body shivering. He sits away, safely away from me, no idea why, then bends towards me quite a bit, carefully avoiding my face, like making for the ear. Then whoosh! A sudden turn and a quick smack, delicate as if he's afraid to break me. Bit too late for that, I'm afraid, Ali. And I swear to God, the exact moment I feel his lips on my cheek, just barely, is like he's being electrocuted, there's like a spasm in his arms. Almost makes me laugh and I'd do it too, would I not to know how much it hurts poor Ali. He's sweet. I asked Irene if she feels it as well and she said she doesn't. Irene is convinced he's in love with me. What even is that? I mean, yeah, it's obvious he likes me, but... I wonder if... Oh, gosh, last thing I need, really. I'm so fucking pissed at my stupid foot, I'd be a right proper bitch. I suppose I am a right proper bitch anyway, but poor Ali never says anything. Yeah, how could he even...? I mean, he's still... but why? Gosh, who can understand men? Actually, Irene can. She seems to be seeing right through them. She even warned me that evening when... Oh fuck, I can't stop thinking about it! Stupid foot!

Poor Ali, he looks even smaller than usual, not knowing what to make of it and with the two rucksacks on his back. Mine is pretty big anyway, I need to bring my tutu, but his is keeping up. I wonder how much stuff can he get in there...

'Is Irene annoying you?'
'Nah, she's just taking the piss.'
'Is it because she's gonna be Giselle?'
'Ali, it's nothing to do with that. Told her today, she kinda pretends she doesn't know, but come on...'
'Well, you said you weren't decided'
'It's been decided for me. I told you I can't carry on.'
'You're still pretty great. Maybe you can just do it like a hobby?'
'It doesn't work. You do ballet to be on the stage. If you can't fight for the lead part, there's no real point to it.'
'So what happened then?'
'My God, Ali, how many time shave I told you I don't want to talk about it?'
'You said you didn't want to talk about it then. I'm asking you now.'
'Well, I still don't want to talk about it.'
'Ok, ok, I'm sorry.'

I intentionally make my sighs longer. I can tell how much they torment him.

'So, do you want to come by the pond tonight? I think my dad's cooking and we'll have a fire. And if you want to, I can massage your foot.'
'Yeah, yeah, yeah, sure you can. Like that's gonna achieve anything.'
'Ok, not massage your foot. But we can do the homework together, then maybe watch something'
'No, sorry Ali, I want to go home.'
'Ok, no biggie' He's almost defeated now. 'Maybe, if you're not doing anything on Saturday, you want to come to the lake?'
'You're obsessed with bodies of water! What if it rains?'
'I don't know. I don't think it will. If it rains we don't go. I mean, I wanted to go anyway, but I'm not sure I'm going alone. That's why I ask, is like extra motivation for me.'
'Yeah, I don't know. I don't know what I'm doing Saturday.'
'You don't have class, do you?'
'Yeah, in the morning, but it's done by noon.'
'See, it's perfect, I can come pick you up.'
'I don't know, Ali, let's talk tomorrow.'
'Ok, I'll remind you tomorrow.'

Shit, my bag is heavy. Lucky Ali brings me home... I look back at him, heading away with his hair a mess and his uniform dirty. It's sweet when he tries to look back, but then turns away immediately, petrified by the thought he could catch my eye. I'm like Medusa! Buf, why can't all boys be like Ali?
Publicat de Leo la 03:43 Niciun comentariu: