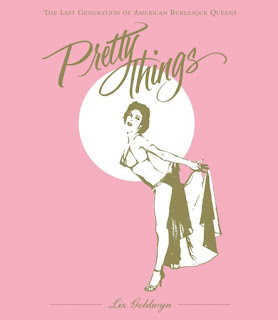 This is an excellent resource for anyone with an interest in burlesque as an art form, though unfortunately it falls short of being a great book in itself as the author hesitates between publishing a coffee table book, a costume note archive or a history of the movement.

I'm not a big fan or consumer of coffee table books, but I can understand their purpose. Pretty Things checks all the boxes of the definition of one such book, though it is larger in scope, aiming to document an entire cultural sub-genre. In the process of documenting the book, Liz Goldwyn stumbled upon a real treasure: Rex Huntington's books, notes and ledgers. Rex Huntington was one of the most prominent costume designers of the burlesque era, so his archive documents a lot of the burlesque dancers' measurements and designs. Therefore, for any burlesque scholar, this is an invaluable resource and publishing it in its entirety would have been an excellent idea, even if the appeal would have been a lot narrower. As it is, there are a lot more of Rex Huntington's notes being left out than there are included, which can be frustrating for the meticulous researcher.

Same goes for documenting the stories of burlesque dancers: due to editorial space limitations only a small number of pictures are included and the approach towards individual stories of the dancers is journalistic in style, too shallow and too brief to do them justice.

This is still a great book and a must-read for anyone with a degree of involvement in the art, but IMHO it fails to engross the wider public.

The book is divided in two sections, the first one documenting the craft of what was generally called burlesque in early 20th century America (with chapters dedicated to costumes, staging, dance, gimmicks, backstage life and a generic profiling of the burlesque dancer), whilst the second part is dedicated to individual stories (Betty & Dian Rowland, June St. Clair, Lois de Fee and Zorita).

To me, the second part is a lot more interesting, and the piecing together of the lives of these ladies from the elite of the craft provides a real insight into burlesque as it was 100 or so years ago. Each of their stories is interesting, each of them makes me want to know more about them. Would Miss Goldwyn venture to write full biographies for these ladies I wonder?

'What is there to like? Hairy chests? A limp joint? You like them because they're customers, because they admire you, because they applaud, because they spend their money to see you.'
In the early 1950s, Zorita had a child with her second husband, Pete Petillo ('the wop'). The marriage didn't last long, as Zorita wanted to get back to work. She took her daughter to the theater with her, adjusting her routine to include a new baby.

Zorita spoke of her career in burlesque with pride but was not particularly nostalgic for days long past. She kept many scrapbooks on the shelf and told me that until I asked her to pull them out, she hadn't looked at them in years. She said 'Wouldn't you hate to live with somebody that was so hung up on oneself that they were busy looking at scrapbooks all day long and telling you what a great act they were? I know I was good.'
Publicat de Leo la 20:13 Niciun comentariu: 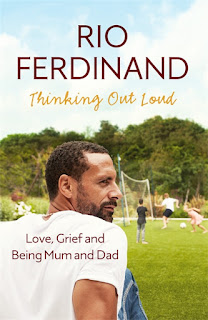 Repeatedly, during the reading of the book and whilst attending its launch, I took the opportunity to mentally apologize to Rio for all the times I have judged him before understanding him. Luckily enough, he's been a good enough footballer that I have next to nothing to reproach him. Sure, there will always be THAT loss against Portsmouth in 2008, when we missed the chance of a second treble, but singling Rio out for it is too harsh to be accurate. No, no, I've never had an issue with Rio on a football pitch, the defender with the best placement I've ever seen, in the league with Maldini or Baresi.

The issues I've had with Rio, historically, are related to his apparent craving for media attention, the work put in developing the Rio Ferdinand brand sometimes seemingly being prioritized over the work of being the best possible Manchester United team player. It is the lot of the football fan, though, is it not? To hold his heroes to standards impossible to live up to. Once Rio left United for QPR, all of the silly grudges have gone. I've wanted the best for him and I really wanted him to do well at QPR, being very surprised when he didn't. Then one autumn day two years ago, while checking the BBC website for results I saw the news of his wife passing. It sent shock-waves down my spine and through the football world throughout. How can one protect oneself from such a tragedy? Why have I been so quick to judge his form without having any background?

Well, few can cope as well as Rio has. And this book tells the story of how he's done it. I have to admit, even when hearing about the documentary, then the book, I was suspicious. Is this banking on a tragedy? I know now that he's not that man. On the contrary. The documentary (which I am yet to see), the book and the talks Rio is currently doing in various locations are an altruistic enterprise. They're meant to share his experiences, his coping with tragedy, and in doing so, the hope is he'll help people who have or will experience similar traumatic experiences.

This is a football biography unlike any other football biography: the sport only stays in the background and despite the insights into Rio's footballing life, the book centers on his family life. Meeting Rebecca - his future wife, their years together, the tough time of acting as a single parent while his wife was being treated for cancer and finally, his struggle to keep going and having to fulfill, this time for good, the roles of both mum and dad for his three kids.

Sure, due to his footballing talents Rio has had, since his mid-teens, a privileged life, and he doesn't shy away from it. But looking too much at the story from this angle doesn't do justice to anyone, least so to Rio. Tragedy is tragedy, and no amount of wealth or social privilege can protect you from it.

Not having experienced a loss as big as Rio's, I don't know how it feels. But I know that if, God forbid, I would suffer such a loss, I'd like to have a book like this close. And I feel it is a great instrument and has the potential to help a lot of people that go through similar experiences.

I cried a number of times while reading it, and there's also a lot of cute moments in the book, specially when he talks about the relationship with his kids.

Writing this book has been an enormous act of courage for Rio and shows both his strength of characters and his generosity. It is a great read, and I now think of it as a very peculiar cross between biography, self-help book and great literature.

Having experienced the death of his mother less than two years after his wife's was soul-crushing even for me when hearing the news. I can only imagine how poor Rio must've felt. All the more admirable that he chose to go through with his projects, all the more admirable to see him weekly in Sky's pundit chair. Even with this review, I feel I've been too harsh with a very admirable man and a great footballer. I'll end with a little story that is, I think, illustrative for Rio's character:

Earlier this month, when attending the launch of the book, we were told that a book is included in the price of the ticket, but there will be no signings, autograph sessions or photo-ops. And it was indeed an unfitting atmosphere for a meet-up between a footballer and his fans: most people in the audience were either recently bereaved or healthcare professionals, Rio's family and close friends were there and yes, there were a few Manchester United jerseys in the room, but they were in no way a focus. At the end, however, ignoring the organizer's advice and venue security's orders, Rio stayed and signed all the books that he was requested to, took all the pictures with everyone who asked him to and was generally an all-round gracious host.

I now feel sorry for ever being judgmental about Rio. Whenever I see him nowadays, whether on TV or in a picture, I just want to give him a big hug.
Publicat de Leo la 18:57 Niciun comentariu: