After taking us from Istanbul to Crete and from there, by land and by sea along the North Coast of Africa to Spain and from there even to the inconceivable beyond, Skiouros' adventures take him to Italy for this third book, where his ultimate foe is alleged to be.

This is of course an opportunity for Simon to talk at large about Italy at the end of the 15th century, and the portrait painted is - not unexpectedly - not entirely complimentary.

By this time our hero, Skiouros the Greek, has formed a solid posse of friends strongly bonded by their former adventures, albeit not by common interest. And if I were to raise an objection to the plot, it would be this: I'm not sure the motivation of the supporting cast is strong enough to take them all along the long and dangerous road they travel over the course of the book.

Parmenio and Nicolo, to whom we've been introduced at the end of the first book, and Cesare Orsini, who we've met in the second book, are joined by a group of other colorful characters of which I wish we could have seen more of. Hopefully this will not spoil the book for you but I will point out that whereas there is a reasonable expectation that not everyone in the cast will make it through their dangerous adventures, the body count in this Assasin's Tale is brutally high, even by Simon's standards.

By the whims of Fortuna, complimented with a drop of his own will this time, Skiouros gets dragged into the highest echelons of the Italian politics of the time and he becomes acquainted with some of the most powerful men in the country. Because the political power and the clerical one are so strongly intertwined this book more than the others not only gives Simon the opportunity, but rather force him to talk at longer length than he's probably comfortable with about religion, divinity, how they are approached and how they should be approached. It's a beneficial venture, as the inquiries into the spiritual do a good job at spicing up what is still a full-on action novel, always exploring siege tactics, fighting techniques and the high end of medieval warfare.

Because of this the book has less of a cinematic feeling, though this does not in any way deny its merits as a fast paced historical adventure novel.

The memorable episode of Skiouros meeting Charles VIII of France is the cherry on the cake of the book, as it epitomises the main purpose of a historical novel: breathing life into characters who'd otherwise only be a picture in a book.

As for the destination of our Greek hero's adventure... talking about it would reveal a great deal of how the action pans out; so instead of doing that, I'll just encourage everyone to discover how exactly Cem Sultan ended his mortal existence. And Simon reveals it in a much more spectacular fashion than Wikipedia will ever be able to.

Because I mentioned a more pregnant presence of divinity in this book than in the others of the series, here's a few quotes to whet your appetite:

Page 7: "God lived in the heart and not in a building, no matter how elegant, and that God listened to the quality of a man's soul, not to the words he uttered by rote from a prayer of any set faith."

Page 137: "God does not approve of vengeful men, though he might oft be so himself"

Page 139: "A dancer in a tin suit is still a dancer, while an ape in breeches is still an ape"

Page 149: "God was a central truth around which men built their own churches to their own needs"

And a very interesting quote on Rome, a hugely important city to Simon's work:

Page 74: "It is a great city full of marvels and glories and hope and beauty [...] but do not let that fool you. It is also a stinking cesspit of whoring, villains, corruption and decay."

This has probably been true for Rome for more than two millennia, as it is true for all metropolis cities throughout history.
Publicat de Leo la 14:48 Niciun comentariu: 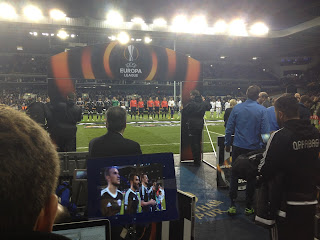