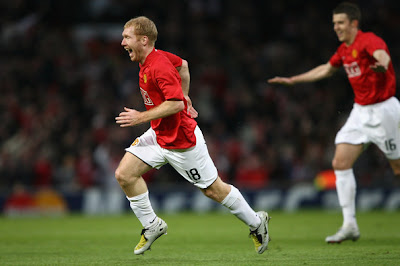 He completed 69 of his 71 passes — only two players made more in the entire 90 minutes — and was eager to get involved at every opportunity. (ED)

He’s always in the right position, always seems to be at the end of the box when the ball drops in. The complete midfielder – when he’s fit, he’s the best. Some go missing but he’s in the right place at the right time. He’s my favourite player of all-time, unbelievable. If you give him a chance it’s a goal, isn’t it? (Micah Richards)

They will obviously be pissed off that they have only managed to beat us once [under Sheikh Mansour's ownership]. We have nicked the games with goals in the last minutes. I’ve done it, Michael Owen’s done it and Wayne Rooney did it last season. That’s maybe the difference between the two teams. (Paul Scholes)

What Paul says about Peter tells us more about Paul than about Peter. (Baruch Spinoza) 10:32
Publicat de Leo la 12:39