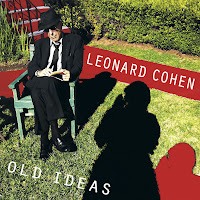 It is rare that I listen to full albums. And when I do, it is always a random event. In the age of digital music, it seems to me the very concept of album lasts due to tradition rather than necessity.

But just becasue the Guradian provided a free streaming I stumbled upon, I decided to listen Leonard Cohen's new album, Old Ideas. There's plenty you can make Leonard Cohen guilty of. He never innovates, his sound is unchanged for over 40 years. His music is too slow and it has, just like Moliere's physicians used to say, sleeping properties. I don't care. He doesn't care. For a man his age and with achievements such as his, being liked by anybody else but himself is the least important thing. His fans don't seems to care either.

I suspect Cohen is not even interested in music in itself. rather, his daimon craves expressing himself in as many artistic ways as possible. Although I think his utmost expression is in poetry. Only because every time I think about Cohen's music, I can only recall images created by the lyrics first and foremost. By the words. The music is just a background, it just paves the way poetry uses to walk freely between souls. This album is no exception. There are a few great poems. My favorite is Anyhow. And some lyrics baffle me to the point that the only reaction I'm left with is cathartic ecstasy, amazement in front of the beauty of the world: "I dreamed about you, baby, You were wearing half your dress, I know you have to hate me, But could you hate me less?"

Going Home, the first track of the album, is sort of an essentialized, stylized autobiography, full of calm, detachement and slightly self-deprecating. Its lyrics are equally impressive, even more so if we believe the master when he says "He's a lazy bastard living in a suit"

The album's been on repeat for the past three days, but I am yet to listen to it enough to learn the lyrics. For all the praise my memory has received, it is rather clumsy when it comes to remembering lyrics. It surprizes me sometimes when I suddenly recall "Tell me again when the filth of the butcher Is washed by the blood of the lamb", but although captivating from the first audition, there's still some listening to it until the album gets me completely.

Reading the lyrics, I identify myself so completely with the images pictured that I internalise them and I start feeling them as being stories from my own life, stories that simply a better poet did me the favor of putting them in writing.

I cherish the memory of the 2008 gig and the big surprise I had upon learning Leonard Cohen can be a spectacular live performer. I hope this album will trigger a new tour and I hope I will get to see the master live at least once more. I am very sorry I couldn't make to his second concert in Romania.

I was hoping this will be an album review. No idea what it is. Of course I can't write album reviews, I said I don't listen to full albums. What's certain is that in January 2012 Leonard Cohen launched the album Old Ideas and it just so happens I like this album a lot. Furthermore, it left me wanting to listen again to Cohen's previous songs. What this old boy does sounds like sad music, music for the defeated, he even calls it this himself a number of times. And yet, few things make me as optimistic as these lyrics do, lyrics sounding like they speak mainly about sex, like an underlying theme poorly disguised, although to me they appear to speak mainly about love. Almost exclusively about love. I certainly am going through a Cohen period.
Publicat de Leo la 23:04