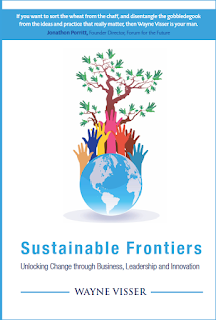 Having just been launched at the beginning of the week, I estimate Wayne Visser's latest book, Sustainable Frontiers, will make quite an impact among the professionals of sustainability. As a matter of fact, judging by the testimonials on its website, it already has.

The book attempts a systemic approach at 'unlocking' sustainability via a series of 8 key factors: leadership, enterprise reform, technology, corporate transparency, stakeholder engagement, social responsibility, integrated value and future fitness. Readers will recognize some of the terms, be intrigued or baffled by others and point out that some of them are better known under a different name. And herein lies one of the problems of sustainability/CSR: no set terminology. It might look like a trivial issue, but allow me to progress the case further of why this is important.

As Dr. Visser repeatedly points out, various forms or elements of sustainability have been around for far longer than our first intuition would make us believe. But there has never been – until recently – a systemic concern for reducing, eliminating or reversing our negative impact; neither have there been enterprises that would have this at their very core, rather than a side concern. As such, the tools for these enterprises are still in development and we are still a way away from knowing how they will end up looking. An important aspect of these tools has to be a set terminology, a commonly agreed lexicon without which the passing of information is rendered extremely difficult, if not impossible.

Ever since coining the concept of CSR 2.0, one of Dr. Visser's favourite mantras has been that 'CSR has failed'. I tend to disagree with it, or reshape it to 'the CSR model that has been in common use throughout the 90s and the first years of this millennium is outdated'. I'm not even sure this is disagreeing. I think that CSR model (CSR 1.0) has had its uses, that generally corporations are now much more aware of their impact than they were 20 years ago and responsibility has been internalized to some degree by both businesses and society. However, we are still nowhere near a definition of 'CSR' or 'sustainability', though we seem to converge on a few of them.

Another tricky side of this systemic approach is that humans lack any sort of capability of systemic understanding. Daniel Goleman points this out in his book, Focus: The Hidden Driver of Excellence, making the argument that there has never been an evolutionary need for such an understanding. Therefore, putting such an approach in practice is likely out of the grasp of any one individual, though obviously influential individuals can make a stronger push (Muhammad Yunus or Anita Roddick are two examples – both mentioned a number of times as positive influences in sustainability by Dr. Visser).

We are, therefore, caught between over-simplifying what sustainability is (ethical behavior) – this having the disadvantage of raising questions all the time about what exactly is ethical - and this insanely complex approach that throws us into a vast territory over which we have no control. How does a huge corporation know that none of the companies in its supply chain is slipping through the net of ethical business? Is one of the myriads of certifications available out there enough? How do I know that my carefully selected household recyclable waste does not end up in the landfill via some logistical misunderstanding?

The key to this dilemma seems to be collaboration, a set of common goals and growing awareness all across the board on the impact of our own actions. Systems Change is a Multiplayer Game is the title of a sub-chapter in Sustainable Frontiers. The book talks about all of these elements and circumscribes them to CSR 2.0, a new form of acting in both business and society.

As you can very well see, the temptation is – when confronted with some form of theoretical approach to sustainability – to reply to those ideas with my own rather than being able to talk about them. Part of this goes back to the clarity of the lexicon. While it is obvious that most of us, sustainability supporters, are on the same side, ideas need to be clarified before we can fully subscribe to them.

Speaking of sustainability supporters (or superheroes, as Dr. Visser calls them), one of my favourite bits in the book is their classification: experts, facilitators, catalysts and activists. This has been particularly interesting to me as for years I've had an ongoing identity crisis when it comes to sustainability. Not being a professional of the field, but rather a supporter oscillating between elated naivety and fatalistic skepticism, this is helpful in pointing out how you can best serve your goals, whatever angle you approach them from.

Parts of Sustainable Frontiers have been previously published as newspaper articles. Add to that the fact that the writing style alternates between a corporate report – clear, concise, resorting to facts and figures – and a highly lyrical meditation sprung from the author's own sensibilities – reworded African legends interwoven with meditations on nature and teachings from half-gurus, and it results a book that lacks a certain internal cohesion, that is missing a central narrative. The up side is, we have a very well-structured work, easy to read and to follow and, most importantly, a book whose purpose goes beyond the first lecture, staying as a great companion, guide and ready reference along one's journey through the field of sustainability.

Below are a few quotes that have stood out. Each of them could be the starting point of a separate discussion about what it is and what it would be ideal to be. Those discussions, however, will have to take place some other time.

“If wave after wave of corporate scandals are revealing anything, it is that corporate governance is sometimes not worth the paper it is written on. If the people involved in implementing corporate governance do not have their hearts in the right place and if they are just going through the motions, the process becomes a charade.You can have all the non-executive chairpersons, non-executive directors, board committees and external auditors you like, but things will go hideously wrong if ceremony has replaced substance and cynicism is the order of the day.”

“Impacts that are far away, or in the future, are like smoldering fires in the distance: noteworthy but not action-worthy. People need to feel the heat: directly, personally, here and now. For organisations and leaders, that might mean lighting a few fires.”

“Bakan (2004) goes as far as to argue that today's companies are pathological in nature, in the sense that 'the corporation has a legally defined mandate to relentlessly pursue – without exception – its own self interest, regardless of the often harmful consequences it might cause to other' “

“our global economy is so inefficient that less than 1% of all the resources we extract are actually used in products and are still there six months after sale.”

“customers and governments need to give up their compulsive throw-away habits and embrace the take-back economy.”

“Necessity, rather than an unexpected attack of conscience, will be the driving force behind the transition to a circular economy.”

“The problem with the rationalist view of organizing people is that people are not very rational. […] In fact, if our understanding of the current state of psychology is even close to correct, man is the ultimate study in conflict and paradox.”

“The point is that, despite all the evidence and frameworks supporting the notion of the holistic individual, business has yet to respond in a meaningful way. Employees are still regarded by companies as inputs to production and expenses in business rather than creative beings and assets in business. People are still expected to leave their emotions, intuition, dreams, fears, family and community concerns and a myriad other qualities characteristic to being fully human, outside of the workplace. And as workers, they are still expected to be motivated and inspired by monetary incentives, increased productivity and profit making as opposed to personal development, genuine service to others and the search for meaning in their  lives. The time is long overdue for business to begin to serve humans rather than the other way around.”
Publicat de Leo la 02:46