When all is said and done, you know this is a good outcome. Italy was the best team of the tournament - by some distance - and deserved to win. Not only that, they brought with them the track record that is the bread and butter of football pundits (however many games undefeated, however many consecutive victories) and left us with plenty of stuff to make legends of. Whether you want to go with Chiellini's smile in tense moments, with the father-son Chiesa symmetry, with the best winger injured in the key moment or with whatever else, plenty to choose from in Italy's trajectory in this Euro. They have, as expected of a tournament winner, furthered the game of football.

And England? Punching above their weight, first time in donkey's years in a tournament final, young time, coming back stronger, plenty of feel-good stories the media can use for the nation's ailment. And a tad less vandalism tonight, and quiet streets. All positives, really.

There was a time, I think during the first half of extra time, when I was like... 'You know what? England can actually have it. I wouldn't even mind that much.' It wouldn't have been right, but life seldom is. In purely footballing terms, coming into the game, it could've gone either way. It's true that Italy played the best football, and us neutrals were right to fall in love with their football right from the first game against Turkey, but they have also constantly lost speed. 3-0, 3-0, but then only 1-0 against Wales. Conceded their first goal against Austria. 1-2 against Belgium, too tight for comfort. And they needed penalties to beat Spain.

England, on the other side, have played relatively boring football, although I think they would call it 'pragmatic' in this country. Crowd the center, don't concede, then snatch what you can. Worked in group stages and worked against Germany. Then Ukraine's game plan crumbled faster than their defense in front of Russia's forced annexation of Crimea and against Denmark, well... Let's just say Sterling has been too much of an asset thus far and felt the need to even things out with the run, dive and beg style of football he is known for. Denmark was the unlucky victim, but it was all about the bottom line by now. After all, it's the hopes of a nation we're talking about, and if they only live at the expense of another's hopes well, we only care about ours anyway. Besides, if anyone can complain about other teams winning ugly, Italy is not it.

Wembley, Wembley, do you know how we get to Wembley? was the word on the street, and on every train platform in London. And Wembley, overflowing with people and hope since this morning, must've been quite a sight in the second minute when Luke Shaw scored the first goal. I suppose I should be happy for Shaw, Manchester United player innit. More on that later.

For know, the acknowledgment that it was a good goal, brilliant run down the wing from Shaw, inspired (albeit a tad lucky) cross from Trippier and a cold-blooded shot to leave Donnarumma stunned. Italy took a while to get into the game and frankly, I thought the first half was the poorest I've seen from them the whole tournament. They only started to get into the game after some 10-15 minutes, and even then, it felt like they're afraid to attack. They were refusing to throw men forward, every run down the wings ended in nothing as there was no one in the box to receive the ball, Immobile didn't really feel like a striker and the midfield line was staying back even with the ball and with space ahead of them.

Slightly different story in the second half, when they started pushing more and more, led largely by a very lively Chiesa. And the goal did come, halfway through the second half. Scored by another defender, sweet irony. Maybe because, just as no one expected Luke Shaw to be in the box for the first goal, no one really expected Chiellini and Bonucci can combine in the opposite box with the same ease they do in theirs. It was kind of clumsy, the kind of goal scored by willpower rather than skill. I doubt Bonucci's gonna care.

The closing minutes of regular time were fairly evenly balanced, with both teams having chances and none of them very serious. Italy was huffing and puffing, Chiellini had to pull down Saka as to outrun him was inconceivable by that point, and when it become clear that we're heading to extra time it became just as clear that it was a case of Italy resisting rather than hoping to score.

Maldini used his substitutions smartly though, Bernardeschi, Belotti and Locatelli provided enough physical freshness for Italy to have the best chances during extra time. Southgate, for all the good he's done with this England team, really blew the game with the extra time substitutions. Kept Sterling in although he was obviously tired, shifted some positions about without being very clear on why, and kept some of his best players on the bench until way too late.

Obviously, sofa management is much easier than on-pitch management and it's cliche to say that the players on the bench are better. The substitutions might've looked like a good idea at the time. But even so... you're putting Rashford and Sancho in for 2-3 minutes hoping you can snatch something, but have them hit penalties? Why not Kalvin Phillips or Sterling, players whose adrenalin levels were high enough to suppress the nerves of the shootout. When you haven't warmed up properly and you have to hit that perfect penalty, you tend to think about it a bit more. And that little bit of extra thinking, of contemplating the ways in which it can go wrong, might just pour a bit of lead into the feet. And that bit of lead might make a couple of inches difference between a goal and hitting the post. Especially when the manager asked you to come on for three times before actually sending you on.

In a way, I'm glad it was our boys who blew it. Part of the reason why I can't bring myself to support England is the abuse United players have had to endure at Wembley historically. At least since Beckham's red card against Argentina in 1998, though probably earlier as well. Sure, United hasn't won as many things in recent times and have thus become somewhat less harmful, less worthy as an object of hatred. But you just wait until the first derby, and media and fans alike will be quick in remembering the Rashford and Sancho misses in the Euro final. To which I say, let them hate us. Or, to paraphrase a well respected England legend: 'Fuck it, it's only England!'

There is much to explore in the psychological and sociological layers of my dislike for England's national team, especially coming from a position of supporting them, and introspections will take place. Perhaps I will change opinion; I will admit that Southgate has done a magnificent job and turned the team from eternal also-rans into serious contenders. With this progression, and with the wealth of young talent available, a major win might well be in England's future. But for now, a European final is just about right. Enough to instill hope and goodwill in the nation, enough to provide comedy material for a continent still struggling to understand these weird islands off the coast of France.

Let England be England. Tonight, and the next days's headlines, should rightly belong to mister Chiellini, mister Bonucci and their colleagues. The dude who got his medal in crutches, the dude from Sassuolo, the kid with a famous footballing father, and all the others. Theirs is the cup, theirs is the glory. And Wembley was a class act tonight for playing Un Estate Italiana for the trophy presentation. 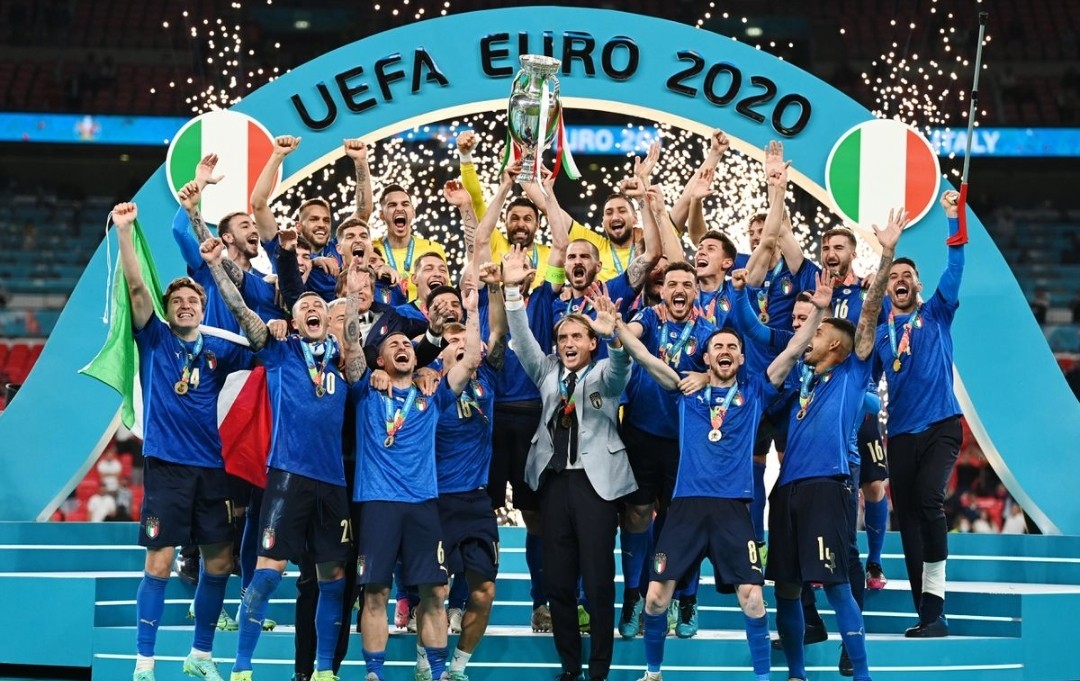