James Kerr - Legacy (What the All Blacks Can Teach Us about the Business of Life), Constable, 2013 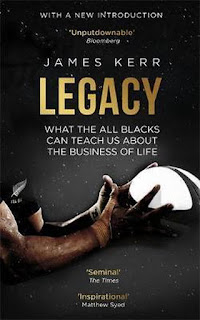 This is a 'book' in the same way the sounds a baby makes are a 'speech'. It looks promising, and it promises a lot, but in actual fact, it's a compilation of sound bites from better books peppered with trivia about the New Zealand national rugby team.
And when I say sound bites, this should be taken literally at times, because if you don't speak Maori, you'll have to scroll through a lot of 'kia urupu tatou' or 'kohia te kai rangatira' which, even though they're translated, they might sound good, but they're close to meaningless without appropriate contextualization.
Same for the English language quotes, some of which sound good, some of which stand well on their own, but all of which are - in their original context - enriched by a sum of stories, facts or research that makes them reasonable conclusions of what has been said before. Not the case here, where postulations from other people are made on each page.
Which is why this book is highly quotable, but not very valuable. A marketing gimmick, perhaps, but not the kind of ethical marketing the good books are written about.
The other side of it, the success of the All Blacks, is just as sloppy put together. Facts lashed out on half a page, without context and without the perspective of anything that was happening around them, giving the reader no sort of clue about how they fit in the bigger picture, and presented as the only explanation (or maybe a prime example?) of the subsequent 'lesson'. However, a few biographies of important All Blacks players are heavily referenced, and one cannot help but think those are actually the ones to read.
With a bibliography ranging from Thucydides to Daniel Kahneman (complex personality, you see) and introduced by a Samuel Johnson quote (because why not?), this book is only good if you're in dire need of pointers towards books on psychology, leadership or sports to read. Sorry, James, but it's a sloppy effort and should be called out as such.

But here's a few of the quotes though:

* 'A great player can only do so much on his own. [...] No matter how breathtaking his one-on-one moves, if he is out of sync psychologically with everyone else, the team will never achieve the harmony needed to win a championship.'

* 'From ancient theology to contemporary psychology, our words shape our story and this story becomes the framework for our behaviours; and our behaviours determine the way we lead our life and the way we run our organizations.'

* 'You don't own the jersey, you're just the body in the jersey at the time'

* 'Example is not the main thing in influencing others. It is the only thing.' (Albert Schweitzer)