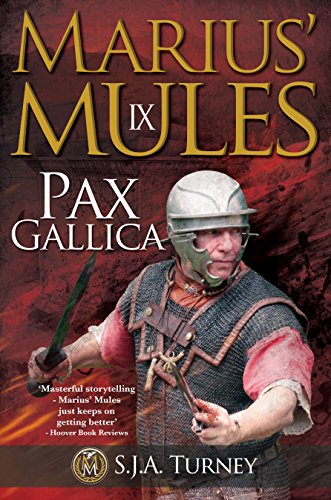 "I am Marcus Falerius Fronto, former Legatus of the Tenth Legion. The governor knows me well." "As do all, by reputation, sir" smiled the optio.


Whenever I write a review of one of Simon's books I am wary of a potential bias. I am honored and humbled that I can call Simon my friend and as such I am aware of a potential conflict of interest. But then I remember that it was the quality of the writing that caused our encounter in the first place. And if one reads the first ever review of one of Simon's books that I've written it's easy to notice where my fascination with Marius' Mules books originated and how it evolved. Besides, I am probably his harshest critic (bar the occasional Amazon hater). I judge pretty much any book I read by a rather high standard and try to see how they culd stand next to the great classics of the universal literature. And I do believe that in this rarefied air of books being read by multiple generations, the saga of the Falerii has its place. Tall order, I know, but so far the only elements missing for this to happen are time and luck.

Needless to say, I am now awaiting each new MM book with an eagerness I did not think possible. Like the previous ones, I have devoured this new Fronto adventure and I shall read it again, together with the rest of the series, once Fronto will be consigned to history. 15 books, says Simon, though I am hoping for a monumental arch over time to encompass the minutiae of the two centuries between MM and the Praetorian series.

Pax Gallica takes us the furthest South we have ever accompanied Fronto, from the North-Western Acquitania through the Pyrenees all the way to Tarraco. There are a few obvious challenges in the writing of this book and Simon confesses to them in the Author's Note: first of all, Caesar's diaries have stopped being helpful. Simon was complaining about their lack of action in the 8th book of De Bello Gallico whereas I thought - and rightly so - the siege of Uxellodunum together with some of Aulus Hirtius' fascination with Caesar would provide enough material for a book. They certainly provide a lot more than the complete silence surrounding 50 BC. But when resources are lacking imagination comes into play and luckily Simon's got an abundance of that. He creates the opportunity to delve once more into a section of Fronto's past still unexplored and in the process he closes some loose threads of the plot that have long been floating in the air. It is, at least partly, an origin story, but occasioned by the chronological flow of the action, and a different type of origin story from Hades' Gate (MM5), for instance. It is, in a way, a classical gimmick of writers of series: once the external demons are defeated, the demons inside the hero surface. In a way, this happens to Fronto at the end of his Acquitanian campaign and obviously, we will feel even more connected to him once these are defeated.

There are also quite a few good old fashioned sieges. None on such a grand scale as the great battle of Alesia, but strategy is strategy irrespective of the numbers. Beyond the enjoyment I took from reading about the mountain sieges, I am fascinated with Simon's ability to bring something new to each and every single one of them. And he is masterful at using the terrain as an important differentiation from one siege to another. It would be oh so easy for MM to be one long series of sieges: this one just like the next, this city just like the next one. Instead, I have now a notion about each and every individual Gallic oppidum and should I ever need to, I can take a pick from a number of ways of capturing one taking into account the strategic objectives of the campaign, terrain, numbers, equipment and skill of the opposing armies.

Now, it is imminent that such a long series would be uneven; some of the books will be better than others. For whoever feels the need for such trivia, I would say Pax Gallica ranks somewhere in-between. As far as I'm concerned, it's quite hard to equal the magnificent MM7, that sees off the great Gallic revolt and the hugely important battle of Alesia. But beyond that, the quality of a particular book is down to individual taste more than anything and some readers might even enjoy the moral dilemmas Fronto faces in Tarraco to the monumental deployment in front of the most famous oppidum in history.

Here's one, not exactly the most important, but relevant for how far Fronto came from the days of fighting the Helvetii: '[The Longinus Villa] would be a better place to bring up the kids while we're banned from Rome and Italia. Rural, with a beach and plenty of land. Not like the villa above Masilia, which is a little more suburban.'

And to wrap up this review, a few more quotes to justify how Simon's books have just as much quality in style as they do in content:

'Only the Romans would send a descendant of a love goddess to lead a war.'