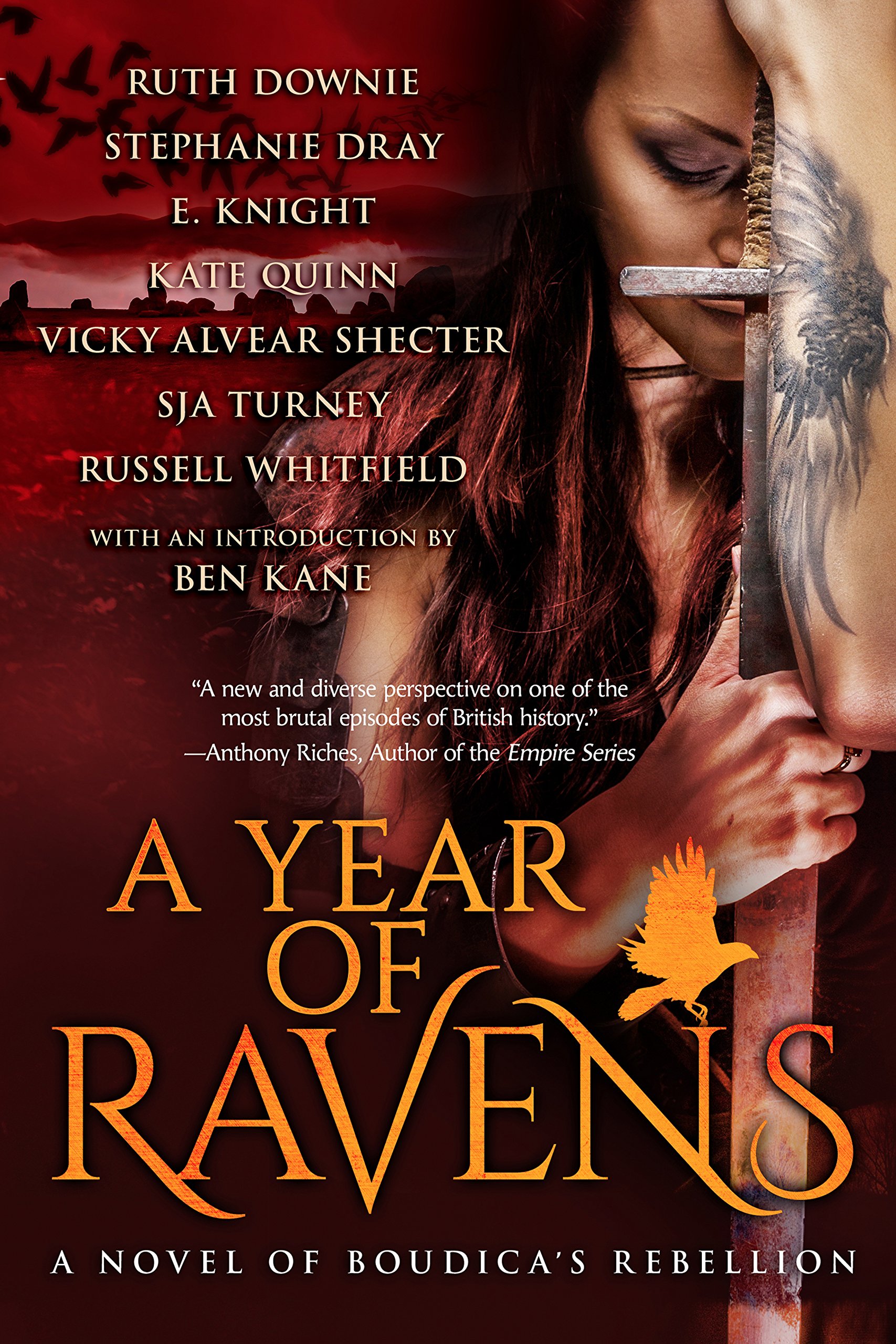 For people who, like me, approached this book from the fanbase of only one of the seven authors (Simon Turney in my case), this is a great way to discover both new authors but also how vast the field of historical fiction is and how much good work is happening in this field. With some of the authors being also very prolific, keeping up with all their novel might also be challenging at times, but I suppose when the water clears everyone picks favourites: favourite authors, favourite historical period.

A Year of Ravens is to me a very novel enterprise, although it looks like the main driving force behind the project, Kate Quinn, has successfully done it before. It also shows how powerful modern communication tools are, as I imagine bringing seven creative minds together in a project so well streamlined and with no glitches or self contradictory information would have been a lot more difficult in a pre-internet age. It is, in some ways, a similar approach to writing TV shows, where characters and the main plot line stays, but style can vary greatly between episodes.

Obviously, the finished product is bigger than the sum of its parts, as the seven authors would borrow ideas, data and inspiration from each other and correct or adjust each other's work while the talent flows freely between the seven of them. Still, it feels slightly less like a novel and slightly more than a collection of short stories. I suppose this is an editorial choice, as the more rigid the main outline is, the more homogeneous the book will feel, while the chapters will very between them proportionally with the freedom the authors are allowed. None of this is a reflection on how enjoyable a read this is, which will always be down to the individual talent. Luckily, Kate Quinn has done a very good job in choosing seven very talented, well-documented and hard working authors. And the process itself, which has always been very transparent on social networks, has been a joy to follow and probably the main thing that convinced me to read the book.

As the subtitle says, this is a novel about Queen Boudica's failed rebellion against the Roman rule of Britannia. The choice of topic is also very smart, as Boudica's uprising is one of those rather abnormal moments in history that don't have a long build up time nor too many far reaching direct consequences. The presence of either of the two would have probably determined some of the authors to write it as a series, rather than a standalone novel. The whole of Boudica's appearance and disappearance from history occurs within a year or so, consequence of a series of very sudden events and very rushed decisions that are not entirely clear to history but that are very well fleshed out in the novel. Same thing could be said about the destruction of Pompeii, Kate Quinn's previous project. What's next, Spartacus?

The boom opens with Stephanie Dray The Queen, a prelude to the Boudica riot seen through the eyes of Queen Cartimandua of the Brigantes, of which we only know was a contemporary of Boudica, but not necessarily that they ever seen eye to eye. They do in Stephanie's account, and the story very intelligently links Cartimandua with both Boudica and Catus Decianus, the Roman procurator whose decisions were the most direct cause of the rebellion. How? Well, Stephanie takes an approach that is rather divergent from the orthodox historical line, but no less credible. Very well written, this chapter is also an interesting study in the status, options and opinion of the client-kings of Rome, a status with which Queen Cartimandua has juggled successfully for more than two decades.

Next up is Ria's story, a slave girl who's the illegitimate daughter of King Prasutagus, and what the build-up to the rebellion looks like through her eyes. Although I like the idea of giving voice to a slave, something that only very seldom happens, I'm not entirely sure what Ria's story actually brings to the table. She is never central to the story, her interference with the grand political developments is minimal and her final exit from the stage seems slightly artificial. And needless to say, she is entirely fictional. We do understand what the status of slaves was, why being a woman slave sucked even more and the many ways in which slaves were fucked over and shat upon, but all this is hardly new. And hardly central to Boudica's story.

Russell Whitfield's The Tribune is the only chapter written entirely from a Roman point of view. I've seen some of the previous reviewers complaining about the language, but I suspect none of those reviewers ever served in the military. To me the chapter felt perfectly accurate, in line with the language, mentality and habits of first century Roman patricians and it can stand alone as a great coming of age story.

Vicky Shecter's The Druid brings to the fore a decision that has been rather detrimental to the cohesion of the novel: the dual perspective. Three of the seven authors use it, so we have 10, rather than seven subjective point of views on the events. That being said, Vicky does a great job at it, showing how detrimental misunderstood cultural differences can be and how silly it all looks from outside. She's got a great story of a forced interaction between two enemies and a very sudden death, which melt together to form a very good read.

Being familiar with Simon's work, I know he's fascinated with the process of cultural assimilation at an individual level. This is exactly what happens in his chapter with Andecarus, son of a famous Iceni warrior growing up as a hostage in a Roman household. The cultural clash, the internal conflict, the choices the individual has to make and the differences between what the heart and the mind dictates, it's all there. And more importantly, this is a story of redemption, of going back to a alleged ideal life that turns out to actually not be so ideal, and a story about making the right choices.

And, as the coordinator of the project, Kate Quinn has saved the best for last. In The Warrior she tells the story through the eyes of Duro, my favourite character and the one I can identify with the most. Unlike some others, Duro benefits from not having to face any moral dilemmas. His system of values has long been set and he only needs to fulfil his destiny. Incidentally, this involves a lot of spectacular fighting, which Duro proves to be very good at. Kate might argue that he is a lot of the times taken out of his comfort zone, but as with Valeria, his counterpart, Duro is way too set in his ways to react anyway else than the way he always has: obey the Gods, obey the Kings, and fight your way through all the rests. Replace Kings with Husband and you pretty much get Valeria.

The aftermath of the rebellion gives Eliza Knight the difficult task of drawing the story to an end that would preferably not be along the lines of "Rome was victorious". Not a lot of originality in that. Of course Rome was victorious, but what of the Iceni? So Eliza sets to make up a completely original story of whatever might have happened to Boudica and her daughters after the battle of Wattling Street. And she does it very well, with the main thing to take from her final chapter being how the dynamic between two very different siblings works and how everyone has got some undiscovered strengths that only come about in times of duress.

There's also an epilogue to round up the novel and bring about a rather poetical resolution for the future of Britannia. Cartimandua makes a short reappearance and links back with Boudica's story, providing an antithesis to the feisty Iceni queen and leaving the reader with one of the recurrent questions in history: live in fear or die in pain?

All in all, a great novel based on a very good story and some brilliant writing, some of which I've sampled below:

"If I would not be universally loved, I must still be feared"
"You were only betrayed by the predictability of my enemies."
"My reputation is nothing when weighed against the good of my people."
says Stephanie Dray through the mouth of Cartimandua in a lesson of tribal politics. While Decianus' domestic trouble provide the humour:

"How was it that women could simultaneously give a litany of specific instructions as though admonishing a simple-minded child and then imply that only by obeying them completely could one live up to the standard of masculinity they had just eviscerated?"

"He looked at me as if I had promised him a honeycomb and handed him a wasp's nest." (Ruth Downie)

"We cannot shape the destiny of the empire from the army [...]
We cannot manifest the destiny of the empire without the army [...]."
"one should count each day as a separate life. All of us make mistakes, Agricola. That's what being an adult is all about. Being a man is bearing them, learning from them, and moving on."
"Well, to make the sculpture, it starts out as nothing. In fact, it is ugly. A piece of lump. But when the right man comes along with the right tools, he makes the lump something beautiful and wonderful. So it is here in Cambria. Paulinus is the man, Cambria the rock. To make it a beautiful thing, as in the rest of Britannia, he must first break the rock. Much of the rock will be wasted. Much of the rock will be dust. But when the job is done... it will be good."
some stoic philosophy from Russ Whitfield, very able in providing it in the field on the military too:

"Naso nodded and glanced al Calvus' body: 'We used to joke that this was the only way I'd get a fucking promotion. It was funny at the time, I suppose.'
'Carry on' was all Agricola had to say."
"Arms observe no bounds, nor can the wrath of the sword, once drawn, be easily checked or stayed; war delights in blood."

"If a babe was left and found alive the next morning, then the child was meant for greatness. If a babe was found dead, the gods had not accepted it - and woe to the mother of such a child, for her fate was never certain."
"Before the sun rose, the world turned gray. Was this when spirits walked the earth? Was this when death would come to claim those the gods had chosen?" (Eliza Knight)

"It all begins and ends with ravens. Ravens, who have seen all the great tragedies of the world unfold, and whose cry is eternal." (Stephanie Dray)

"It's one of the great joys of writing historical fiction, wondering more about the characters and less about the deeds of these long past lives" (Russ Whitfield)
Publicat de Leo la 22:42