Not about Marius, nor Mules 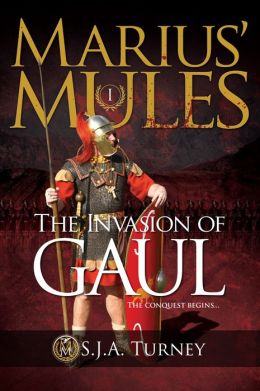 Nowadays, I hardly ever read fiction. And by no means would I have read Marius' Mules if it wasn't for an arbitrary series of circumstances: a Facebook advert was offering it for free and I wanted to learn how to use and to test how easy I find the iBooks application on my new iPhone.

Everything cliked and I started reading it. And in the course of doing so, I felt cheated a few times by this book: at first, I noticed it is the first one in a series, with a drug dealer type "first one free" technique. I feared I would get to the end only to be told that I need to buy the next book. Well, it's not like that. The Invasion of Gaul is a very round novel, with a classical beginning and end structure and a strictly chronological depiction of events. The ending is even built up, as the characters talk about it throughout. I am now however itching to read the next in the series, not because anything exciting is just about to happen to the heroes, but because I have come to know and like them and I have become too drawn into their lives not to follow them further. Besides, the price of the next books in the series is minuscule, and the author makes a point of it:

I do, however, have control over the price of the electronic editions, and I have deliberately set them as low as the publishing system will allow. The reason for this is that I am passionate about both reading and writing, and I believe that books are becoming too pricey. If things continue with the current trend, people will stop reading unless they're quite wealthy, and will rely on TV. I would rather lower the price and encourage people to read.

Next thing I came to notice is how close the action in the books follows Caesar's De Bello Gallico. A quick research and a note at the end of the book reveal the author's full disclosure though: his purpose was to fictionalize Caesar's dry historical account in order to make it readable for the contemporary world. I'm not sure how I feel about this: while I feel it is a laudable enterprise,  I think less of myself if I need fictionalization of the classics in order to access them. That's why I just started reading De Bello Gallico and will take up on Fronto's next adventures as soon as I finish it. So I'm guessing it's good then: a book that makes me read another book is always a good sign.

I do prefer fictionalizations in the style Charles Frazier writes, heavily documented and filling in with licences only when historical sources are mute. I did expect the main character, Fronto, to be drawn from some document or funerary stella and was a bit disappointed upon finding out it has not been the case. But Mr. Turney is excused considering this novel is spun solely out of passion for ancient Rome and he is not (or was not, at the time of writing) a professional writer.

That is not to say Marius' Mules is not heavily documented: on the contrary, the reader will be introduced to a lot of Roman terminology, way of thinking and military strategy. So much so that the book reminded me at times of Sun Tzu's Art of War. And I was always itching to play Rome: Total War and recreate Fronto's battles. It is just the characters that are plucked out of thin air, but they're all rounded out so well that it makes them all entirely credible.

An author's stated intention and a big plus of the book is to look at the men behind Caesar's successes and how they contributed to them. It is obvious that Julius Caesar could not have become the great commander he was without a number of supporters, but it is very easy to overlook the people whose name left no mark on the historical records.

A fault of the story is the chapter investigating the low morale of the army just before meeting the representatives of the Aedui tribes, and for now I cannot tell if the sub-plot is too thin because of the writing, because of the sources or due to a discrepancy between the Roman and the Western contemporary way of thinking. I did protest throughout about some lines that sound very British and very out of place when said by a Roman soldier, but I guess there's no getting around this: a Roman soldier would have an equivalent that would make little to no sense when translated literally from Latin. Another way around this would have been writing the whole damn book in Latin, but then we'd be talking about a completely different sort of an enterprise.

Just one last mention, and a very striking one at that: there is a very strong cinematographic feel to the book. Movements and costumes are described in so much detail that it would be a struggle not to view the action as a motion picture in the reader's mind. This book almost screams about being turned into a TV mini-series. I hope it will be, sooner rather than later and I would make an attempt at doing it myself, would it not be for the historical costumes and the huge number of extras involved, details that spell big budget production all along.

And that's pretty much it. I will probably have to say a lot more about not only Fronto, but also the likes of Aulus Crispus, Balbus or Ingenuus at the end of the seventh book. I am convinced that, would I have read this as a child, or even in my teen years, Fronto would have become one of my heroes, along with Winnetou the Apache, Tarzan of the Apes, D'Artagnan or Robin Hood. I can only hope that there is still a generation of kids out there who get their heroes from fictionalized history rather than Disney merchandise.

And I'm not sure if Marius' Mules reconverting me into reading fiction is a good thing or a bad thing.
Publicat de Leo la 21:09