Oh no, Iceland! The result today is discouraging for the smallest nation in the competition. They only needed to ride out this game without losing and they were in prime position to go through. Now everyone will be fancying their chances and despite Iceland having apparently the toughest game in the group, Croatia is as good as qualified. That doesn't necessary mean they'll step aside, but there's no hiding for Iceland: you have to go for a win. I haven't watched any of the game against Nigeria yet, but though I am looking forward to it. I imagine Iceland set out to defend for dear life and the Nigerian goals were individual achievements. Truth is, you can draw Argentina all you want, but there does come a time when you have to go after the game, when you have to attack and try and score goals. Despite their enthusiasm, Iceland might not be best equipped to do this.

Same goes for Costa Rica. They were just as poor as in the first game, setting up to keep bodies behind the ball at all times. Didn't work against Serbia and it wasn't going to work against Brazil. Well, it almost did. But almost is the key word here, with the pressure always intensifying as time runs out. It's not really an accident Brazil did score in the end, more often than not it happens. And the fact that they scored two goals in quick succession shows the fury and the pace at which they were attacking. Yes, Costa Rica did have the best chance of the first half, when Ruiz stretched Becker, but even a one goal advantage can be overturned if all you do afterwards is defend. 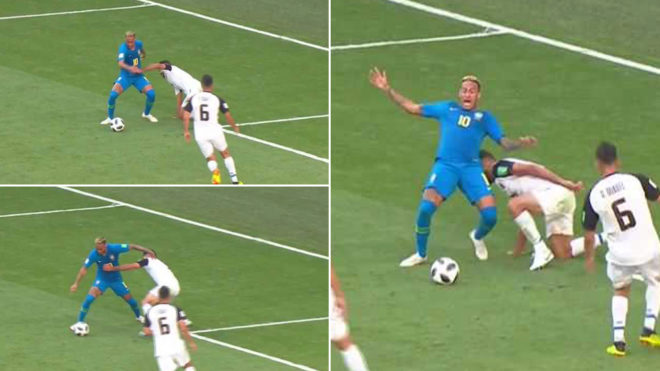 Neymar is right to be frustrated, he was fouled all over the place, but the ref was right not to grant a penalty when the two Costa Rican defenders ambushed him in the box in the 78th minute. There was contact, yes, even enough contact to cause him to fall, but it did look like the defender set his body to stop Neymar from advancing rather than to try and take him down.

All's well that ends well, however, and Brazil are now in a good position to qualify. They still have to beat Serbia to win the group, and that's not going to be easy, but by the same token I have the feeling the Serbs won't go for the defensive outfit.

They did drop the ball massively today though. Scored after 4 minutes, brilliant textbook goal, completely in control of the first half, they must've spent half-time wondering who they'll meet in the knock-outs. Might as well be the flight attendants now, because sometimes football can be cruel like that. In the second half different teams came out of the dressing rooms, and the Swiss were all over the place, pushing and pushing. Xhaka's brilliant volley leveled the things up shortly after the interval and, heart-breaking as it might be to get a goal right at the death, it is the punishment for not planning contingency. It's a sticky one for the Serbs now, as they'll have to beat a Brazilian team in need of points to be sure of qualifying. They'll be heroes if they do, and it will be interesting to see if Brazil will be holding out for a draw that will see them through. The Swiss are now favorites to win the group, but we're in for a very interesting last round here.
Publicat de Leo la 04:59