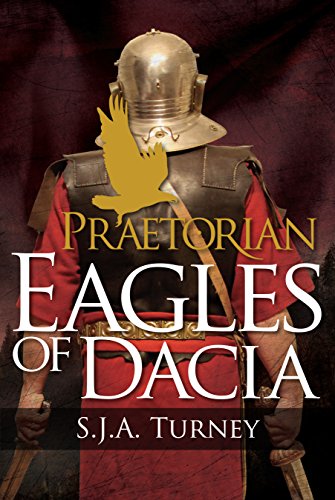 There are two main reasons this book is special to me: it is the first time Simon writes about Dacia (and it's my first contemporary read about Dacia written by a non-Romanian) and I get a mention in the book dedications. While a huge honour and an unexpected surprise, I also believe this to be rather undeserved, though I shall accept it nonetheless.

After a quick rise through the ranks in the first book of the series and just as quick a fall from grace in the second, Gnaeus Rustius Rufinus is sent to Dacia in something that is halfway between a mission (to check the loyalty of the governors) and an exile (Cleander, the imperial chamberlain wanting to send him as far away as possible from Rome). It is this journey that is covered in the book, plus a whole bunch of trouble that Rufinus has a real talent for getting himself into.

Rufinus is accompanied by Senova, the freed slave girl he meets and falls in love with in the first book, and Acheron - the dog he acquires from the dead Sarmatian guard Dis, also in the first book. On the way they'll acquire a slave boy, Luca, putting the numbers of the travelling party up to 4 (5 if we consider Atalanta the mare). The journey starts immediately outside Dacia, in the province of Moesia, and so does the intrigue. An adventure full of twists and bumps follows, taking our heroes at the Northernmost reaches of the empire, followed by a journey down through barbarian lands and an unexpected end point. It's hard to speak too much about the plot without giving away the pleasure of discovering it, as Simon does a fine job of always adding unexpected turns. Therefore, even this is a book centered around a journey, there's plenty of adventure to be had on the way, peppered with the usual sieges, battles and fights.

I suppose one way of looking at the Praetorian series is that adventure is the substance being molded into the various shapes of each book: political intrigue in the first, addiction and fall from grace in the second, travelling and discovery of exotic lands in this third. And all of this is backed by Simon's excellent documentation and research, recreating the atmosphere of late 2nd century Rome in fine detail. This recreation of the atmosphere includes gems like 'They had acquired four local guards with unpronounceable names, only a dozen teeth between them and less command of Latin than your average pomegranate.' or 'A good punishment detail will change arms with each stroke so that the blows cross and do more harm.' They don't teach this kind of stuff in religious studies.

While all the story-lines in the Praetorian series are works of fiction, they are based around important historical events, and although we do not know of the historical existence of any Praetorian soldier called Rufinus, the historical characters in the books are captured not only accurately, but by giving them a real voice it becomes very easy to understand their thoughts and motivations. After we've met Marcus Aurelius and Commodus in the first book, Pertinax and Septimius Severus in the second, in Praetorian III we get introduced to two other Roman emperors, namely Clodius Albinus and Pescennius Niger, bringing the gallery of emperors in the Praetorian series up to an impressive six so far (although 3 of them will have a very short lived reign). But while the list of Roman Emperors reads Commodus (177-192) - Pertinax (193) - Didius Julianus (193) - Pescennius Niger (193) - Clodius Albinus (193) - Sepimius Severus (193-211), having them as characters in a book gives a better understanding of how the wheels of the 'great game' spin.

There are three elements that I particularly appreciate about Praetorian III, though I will only mention each of them without too much details, with a view to the same care I mentioned earlier, not to spoil the book for people who might read this review first:
- the mirror journey: over the course of two weeks in April 2017 Simon took a trip largely along the route he will send Rufinus on, later in the year. There is a bonus feature in the book that makes the reader part of both adventures;
- the gold mines plot: contemporary sources give the gold of the Western Carpathians as one of the main reasons for Trajan's invasion of Dacia. Impressive quantities of gold are mentioned in relation to Trajan's plundering of the province, but more impressive still is the fact that 19 centuries later Gabriel Resources spent an alleged $17 million in bribes for the rights to keep mining gold from a region where gold has been mined since Roman times. It is therefore right that the gold mines at Alburnus Maior feature heavily in the plot of Praetorian III and Simon has found a way to do this that is entirely believable.
- the end twist: I will not say much about it, obviously, just that I am rather excited about Rufinus' new patron and I am therefore looking forward to Praetorian IV. Late 2018, I hear.
Publicat de Leo la 19:33