X out of X 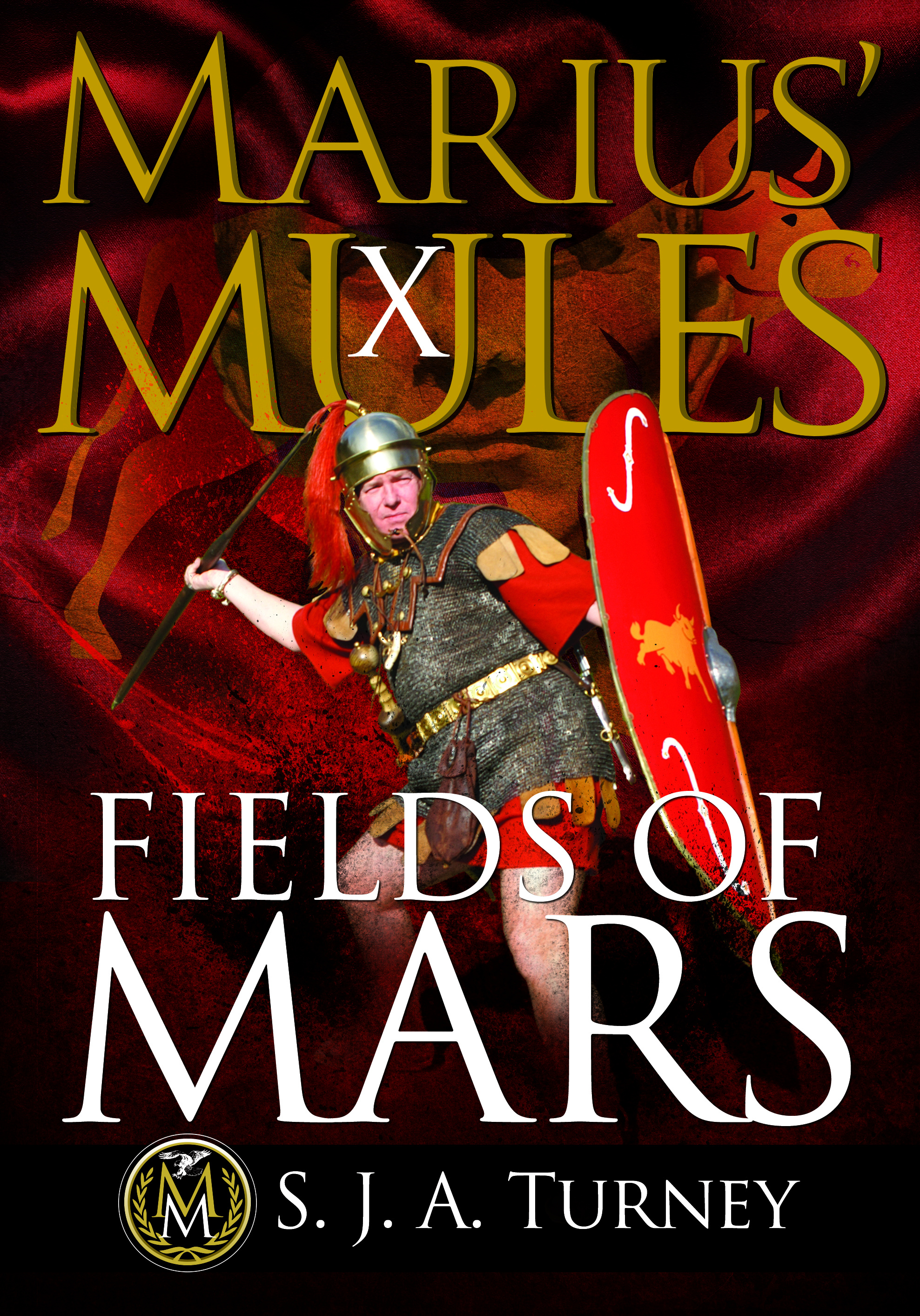 Reviewing the tenth book in a series is really just for people who are already familiar with the series to some degree. If you're not familiar with Simon's Marius' Mules (the Falerii saga) I shall refer you to the first book. But be prepared for a binge read of 10+1 volumes, to which Simon says will add another five books. I don't personally agree with his idea of sticking religiously to the timeline of Caesar's diaries as some years of the Gallic wars are rather uneventful, whereas the year of the Arveni revolt could easily fill two or three volumes. Nor am I too happy about the prospect of the series ending with Caesar's assassination (oh, yeah, spoiler, Caesar dies in 44 BC). Because regardless of how it might've started out, this is not the story of Julius Caesar, but of Marcus Falerius Fronto and maybe, just maybe, the saga of the Falerii, depending on how much convincing Simon will need in a few years' time, once he has ran past the events on the Ides of March. What will Fronto do during the battle of Philippi for instance, a real war of brothers, where friends of his will be pitted against each other? What about Actium? Will he manage to be neutral in the battle that marks the de facto end of the Republic? I guess we shall have to wait and see.

In the meanwhile, Fields of Mars is Simon's treatment of 49 BC, the first year of the Civil War that will see the end of the First Triumvirate. It is the year of the Rubicon crossing (along with the famous 'Alea jacta est') and the year by whose end Caesar will secure the loyalty of Italia and Hispania, thus controlling what will later be known as the Western Roman Empire and setting up the decisive clash with Pompey in Greece.

Unlike the Gallic wars, this is a civil war and will therefore involve as much diplomacy as it will need fighting. Simon, who clearly enjoys writing the latter more, is bemoaning the fact, although I think he does a pretty fine job writing negotiations and politics and it keeps an alert pace throughout the book, even though yes, the maneuvering takes more pages than the actual fighting.

I remember reading Caesar's diaries and being impressed with the siege works built for the taking of Massilia. All of it is well fleshed by Simon, though only after he decides to take Fronto on a tour of Hispania through which his sword gets bloodied a lot less than we're used to.

But there's two major achievements here that make the volume stand out within the series:

1. The Naval Battle of Massilia. It is, as far as I remember, the biggest naval conflagration Fronto has come across so far and Simon proves he is just as ease writing naval strategy as he is writing field battles or sieges. There's some really spectacular pages there, once again the entertainment factor being doubled by a great history and military history lesson, just as Simon's extremely exhaustive knowledge of the period - in full display here - is double by a very gifted pen.

2. Salvius Cursor. This is a fictional character, and a new addition to the impressive panoply of figures and archetypes of the era. Because Fronto needs an antagonist while Caesar is too edgy and there's not enough fighting to pick someone from the opposing side, it is the legatus' second in command that serves as opposing pole to our man from Puteoli here. I don't want to give too much away, but just like with Cavarinos in The Great Revolt, Simon achieves an impressive feat in creating a character that walks many miles in the grey area between positive and negative without ever really touching its black and white borders. Applying modern military norms, I'm tempted to say Salvius' insubordination would have brought him a much swifter exit either via a metallic tip or via stripping of any sort of military capacity, which tends to happen once a direct order is disobeyed. For the sake of a good read, however, I am tempted to grant this suspension of belief, if only to satisfy my curiosity as to where this feisty tribune will eventually end up.

Another cute addition - and it'd be really funny if this were in any way true - is the Gallic Defense Fund, chests of treasure that allegedly were meant to secure Rome against a further Gallic invasion. Along with other artefacts such as 'legion eagles from the time of the war against Carthage', this has gathered dust in the cellars of the Temple to Saturn ever since the time of Brennus and all the way up to it being plundered by Fronto. Come on, is our legate not at the very center of history?

And I shall end my review with a few nuggets of Julian wisdom, via the Turney spectacles:

'I do not like to leave things to chance if I have the option to prepare.' - this reminded me of a favourite Arab saying of mine: 'Put your faith in Allah, but make sure you tied your camel.'

'I have no wish to come between a man and his conscience' - Caesar letting go of Labienus. Titus Labienus' appearance in Caesar's diaries during Civil Wars is so brief that the rift must've been painful. very curious how Simon will handle it.

'First we deal with an army without a general. Then we can deal with the general without an army.' - another reminder of another quote I enjoy, this time by Alexander, allegedly ahead of the battle of Gaugamela: 'I do not fear an army of lions led by a sheep. I fear an army of sheep led by a lion.'