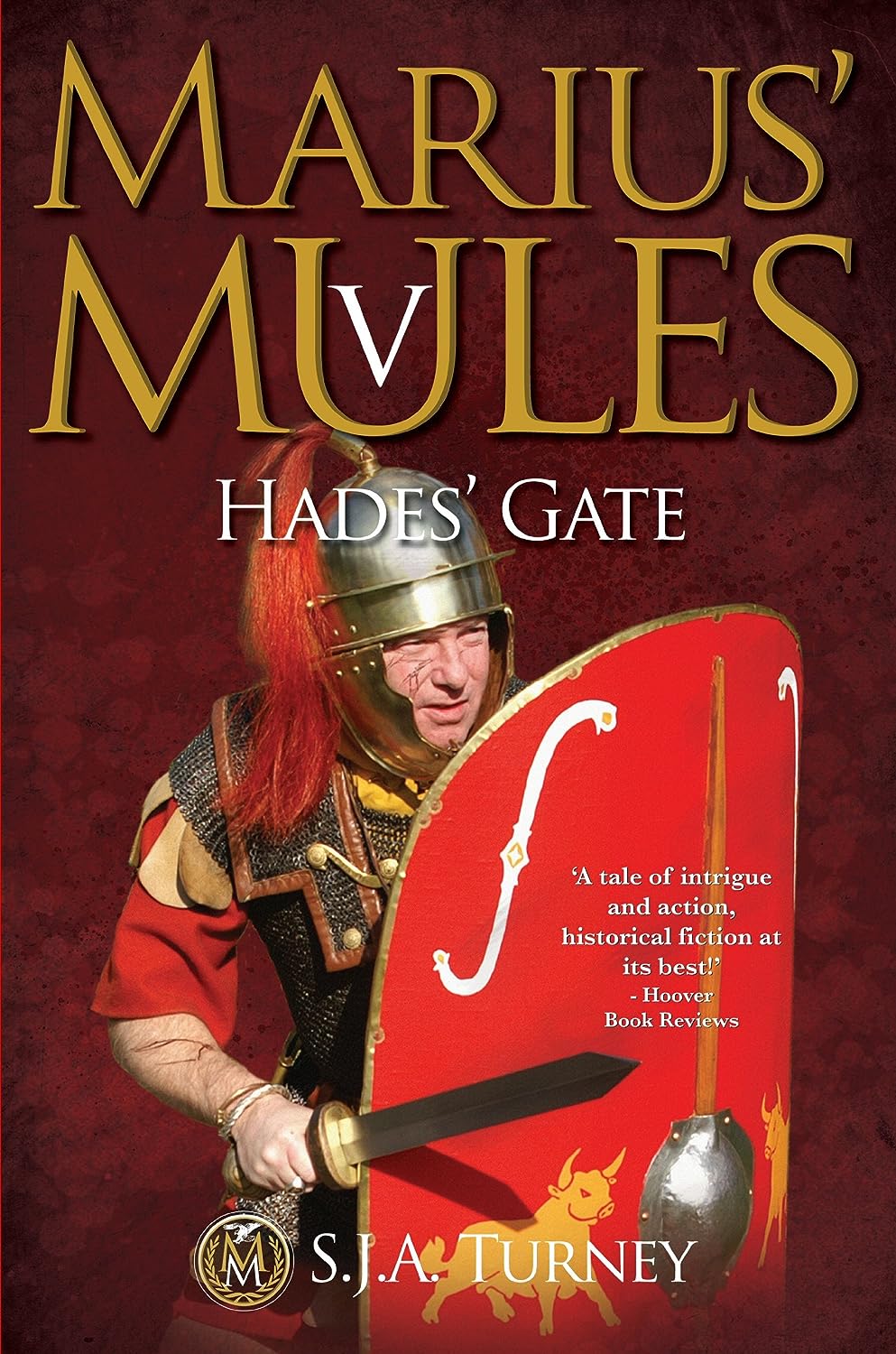 With the previous, fourth book of the series, I declared myself disappointed that Fronto is left out of most of the action in the Rhine crossing, and not entirely content with the going ons in Rome while there's a war on we want to read about. This fifth book sees everyone's favourite legate completely out of the action of what it is to my mind another very eventful year in Gaul, yet there's no disappointment in that.

Now immersed in the scenery of the decadence in the great city of Rome, I found it entertaining to read about Fronto's adventures there, of a completely different nature than the ones in rural, barren and manifestly hostile Gaul. It was good to read about a Roman wedding, it was good to see Galba and Rufus in togas and political roles and good to get insights of Pompei in the build up of his oncoming confrontation with Caesar. I have taken a particular liking to Galba ever since the battle of Octodurus - a Roman noble not built for battle or war, but never shying away from either. He is now in the much more familiar environment of Roman politics, but his character and allegiances have stayed intact. A small role for him in the book, but essential for the reader in that it provides the link between the familiar faces of Gallic campaign and the novelty of politics of the city.

Delightful the introduction of Masgava, and I expect the character to become another personal favourite over the next couple of books. I mean, listen to the man: "There is no such thing as pain. It is a fantasy of the weak mind. Do not allow yourself that weakness and you will train yourself to ignore all pain. Be the master of your own body. If you do not, your body will master you and you will be a little more than a bloated sack of organs."

"To be prepared for any fight is mostly a matter of mental attitude rather than skill. See everything around you not for what it is, but for what it could be."

Elijah the Jew is another character I grew fond of very quickly, though I get the impression he is mostly a channel through which Simon voices the respect of his Roman heroes for the monotheistic faith.

Gaul is not forgotten, meanwhile, with Priscus taking over the role of Caesar's prime censor - and a variety of other roles, too. I am still a big fan of Fabius and Furius and their rivalry with Pullo and Vorenus is delightful. I am, however, not entirely sure their characters are thoroughly consistent. Ever since their first appearance they have been deemed untrustworthy by Fronto and pretty much everyone else that matters. After their big reveal moment everyone seems to have taken a particular liking to them and they have turned from the two most uptight centurions in the Roman army into two blokey characters that will probably soon delve onto the same path of booze and indiscipline that Fronto seems to drag everyone to. A long way off from the centurions who'd condemn a man to death for getting a practice exercise wrong. While it is possible - specially given their actions - I think it usually takes a lot longer for people to gain that sort of trust, even more so in a military environment.

Pullo and Vorenus have their big moment in this book, too, (one that I wrongly expected in MMIII), and Simon is at his best when describing it. It would have been an occasion, perhaps,to make more of the competition between them, that goes hand in hand with the camaraderie. Something along the lines of the primus pilus being killed shortly before and the two of them contending for the position - closer to Caesar's description. And it is a great sight to imagine the general watching their mad commando from the ramparts and, encouraged by it, to grow from despair to hope.

For the second invasion of Britain, Simon's approach is rather sympathetic to Cattuvelanus and the Briton tribes. We are dealing with an approach I have seen before, pertaining to Alexander's one day expedition north of the Danube: the great military power was unable to contain the indigenous threat, so they reached a compromise that history has glossed over and they left the invaders with the glory and the natives with the land. Comforting thought, but I doubt reality was ever that way.

Cotta and Sabinus' demise, however, is spot on and exactly how I always imagined it. Also, a very useful subplot that goes to show hostilities did not cease all of a sudden just because legions settled into winter quarters and most of the superior officers went back to families.

Towards the end, this fifth book drops the standard quite a bit. Simon declares the monster of Vipsul one of his great characters. I strongly disagree with it and I find the character rather useless, as is the very vivid torture scene of Balbus' chief slave. Berengarus' plight is a legitimate one and it is easy to understand his quest for revenge. But rather than making it a conversation about the morals of war and their abjection when brought into a civil environment, Simon turns everything into an 80's action movie, with gangs and thugs. The only good thing about it is the moral uncertainty we're left with: Berengarus dies without having his revenge, but is this the way it should have been?

Fronto's reconciliation with Caesar is doubtful, as well. Regardless how powerful, this is a man who endangered Fronto's family and under whose command his physical integrity is never guaranteed. And Fronto has now a lot more to lose. Seems hardly believable he'll leave a young wife and a life in the quiet countryside (where he's also protected from political intrigues) to go back to suffer, fight and endanger his life in an inhospitable and hostile land under the leadership of a man he dislikes.

However, since it's all made up, we need to suspend our belief for a little while. Because yes, the natural course for Fronto would be retirement to an idyllic, patriarchal life style. But that's not much of an action novel, is it?

I'll leave you with a quote that did not seem to fit the body of the review, but is remarkable for its phrasing and its similarity to Sun Tzu's magnificent Art of War: "There are many reasons why a battle is won. Weight of numbers can be a decisive factor, but only if all the other facets are in equal balance. Terrain is often a heavy factor and has ruined many a great commander's day. Morale can be crucial and sees off even supposed conquering armies. And surprise can swing the tide of a fight in a heartbeat."
Publicat de Leo la 16:23