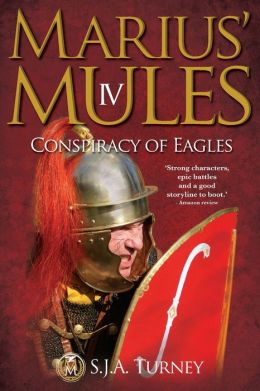 After catching my attention with the first book in the series, finding his feet and going all out with some wonderful battle scenes in the second and then rounding the story up with more of the same plus an in-depth exploration of characters and background stories in a peaking third book, I thought the fourth book drops the standard a little bit. After all, Caesar's fourth year in Gaul makes for some great reading, epic scenes and much of the world history being made: first advent of an organized Roman force North of the Rhine, first Roman military expedition to the British Isles and the year in which Trans-alpine Gaul is referred to as a Roman province in Rome. So naturally, I expected Conspiracy of Eagles to flesh all of these out. Instead of sticking to the beaten track, Simon makes some very unexpected choices.

The last book, Gallia Invicta, already saw two of everyone's favourite Romans, Lucius Vorenus and Titus Pullo, given less space than even Caesar in his concise reports thought necessary, and that was unexpected. Understandable though, as probably Simon did not want to delve into similar story lines with HBO series' Rome. But with Conspiracy of Eagles, most of my guesses about the focal points of the book have gone astray. Crossing of the Rhine, and the magnificent bridge Caesar was so proud of that he took the time to describe in detail the building process? Rather briefly dismissed by Simon, who instead takes Fronto across on a different route and would have probably made him conquer Germania all by himself, had Caesar not decided to leave quickly. Attack on the British Isles? Hmm, this was a tricky one. No character, not even Julius Caesar, the man who stood in front of Alexander's statue and measured his achievements against the great warrior's, have any sense of history or majesty, which would be the first thing in my mind. With a visible affection for his native land, Simon opts for a very tongue in cheek description of the South East coast, one that - although entirely accurate and well documented - has become the funniest cliche I've ever encountered: while in Spain the rain falls mostly on the plain, in Britain the rain falls everywhere, all the time. So much so that there are numerous words in English referring to rain that a language like Italian has an awful time translating. I remembered reading the letters of Roman legionaries in Britain at the British Museum, most of which were full of complaints about the weather and requests for warmer clothes, and that sentiment was fully echoed here.

There is some more attention paid to this first, largely unsuccessful incursion in England, but the focus is always some place else. While the battle scenes are as gripping as ever, the reader's main focus goes back to an intricate web of conspiracies, politics and personal dramas that puts Britain in the background. I expected Simon to put all the blame for the ill-planned expedition at Caesar's feet, but in hindsight it would have been all too easy.

And then finally, in the last few chapters of the book, I surrendered to the idea that this is no longer a historical novel but rather a policier set in ancient Rome. As soon as I did that, the book appeared in a very different light, and Simon proved (once again) to be as masterful a writer with criminal investigations and espionage as he is with battles and sieges. The cherry on the cake is a plot twist at the very end of the book that only left me wanting for more. Luckily, there is more and this time I will expect nothing from the fifth book. No druids, war chariots or pict archers, no masterclass in sailing from one of the few glorious chapters of triumph at sea in Roman history and no expectation from Caesar whatsoever. I have obviously grown very fond of Fabius and Furio (although I still can't really make them apart), so naturally I'd like to hear more of them. Not very sure I will though.

And then there are some big questions that lie in waiting to which probably Simon only has a sketch of an answer as of yet: what of the Civil War? Will a married Fronto be willing to carry on fighting? Moreover, will he be still supporting Caesar when he takes on Rome? What of Labienus, of which we know for sure fought for Pompei? At which point the rift between him and the general will pass the point of no return? Will death, from which Fronto has escaped so many times, finalli find him on the battlefield, or will he see off his days in the warm sun of Southern Italy? Well, there's three more years of campaigning before we get any closer to the answer.

Some web reviews of Marius' Mules seem to protest against the modern elements in the language. I have raised this point in my review of the first book. Some of it is justified (yes, to bury the hatchet is a expression gifted, together with the Americas, by the pre-Columbian natives and yes, the language does put the novels in a modern context, enabling readers of the future to easily identify the time of writing), but none of it matters for the author's enterprise. The series still stands as an amazing introduction to the Roman world and to a series of legendary figures of heroes and super-heroes who have the capes and the money, but lack the batmobiles, extraterrestrial birth or gene changing accident. I am more concerned about reintroducing the characters each time they appear in a book by their deeds and achievements in the previous books. It gives the series one of the most disturbing traits in the TV documentaries of today: the assumption that the audience are too dumb to follow a point if it's not stressed every ten minutes and that they need to be reminded about the matter at hand after each advertisement break, because they all have the attention span of a goldfish.

One historical point to address: there are a number of references to the wolf standard as symbol of the cavalry. I have raised this point to Simon and luckily he said they stem not from historical references but from personal preference. Which was fortunate for me because it spared me hours of re-reading of sources. As a Romanian, I hold the wolf standard as an important symbol and take some pride in the fact it was adopted by the Roman cavalry after the conquest of Dacia. While it is not exclusively a Dacian symbol, there is no record of its official use in the Roman army before the second century after the Empire.

And a quote I particularly liked: "It [politics] won't bother you, I suppose. You've been given a sword and pointed at a barbarian." says Fronto to the two centurions in the discussion on the beach. This resembles another favourite quote of mine, written by Antony Minghella for WP Inman, the Civil War soldier who says he's been sent to war, like countless others, with a lie and a flag. Both phrases echo a larger truth, the fact that wars are essentially useless, a horror for soldiers and civilians alike, from which a handful of political heads profit. But, gosh, there is something so terribly attractive about wearing a sword and a shield!
Publicat de Leo la 14:47